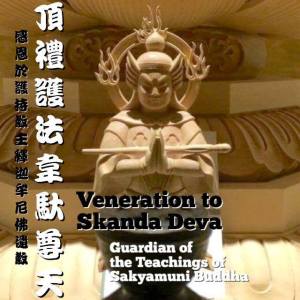 Skanda Deva is a celestial being with his image commonly found at the back of almost, if not all, Chinese Mahayana scriptures.

Skanda Deva is one of the eight celestial generals that are under the command of Virūḍhaka, the Guardian of the South, according to Mahayana belief. Skanda Deva was known for his speed and hence taking it that He is fast to heed prayers that seek protection.

Sakyamuni Buddha had instructed Skanda Deva to protect and safeguard the good dharma and that explains why his image is commonly used in Mahayana scriptures and temples. This make Skanda Deva a common Dharmapala, a protector of the Dharma, in the general Mahayana practice especially in the Chinese Buddhist community.

Sometimes I do ponder what is protecting the Dharma about? I mean, it is just Teachings of the Buddha isn’t it? What is there to protect about?

My understanding is that, Dharmapala, works in two manners, the part that can be seen and that part there cannot be seen.

For the part that can be seen relies on us, on anyone who studies the Dharma from academic perspectives or practicing the Dharma. In all circumstances, it is our responsibilities to grasp the essence of the Dharma that we read from scriptures and gradually have the ability to discern what is being taught by others be it laypeople or clergy. The first of the Noble Eightfold Path is Right Understanding, that would have been the basis of all types of Dharma practices. This is important because as much as information technology allows us to access to scriptures and other worthy writings easily, it is also easy for people that distorts the Dharma to disseminate their version as well. So by being able to discern the right from wrong is already a way to protect ourselves from holding on to wrong views. Are wrong views that terrible? Actually, yes, because our rationality, conduct and communication are affected by our outlook towards life. And often than not, we can see how the inspiring Dharma has been manipulated into a pessimistic-belief.

For the unseen part, this is where the external Dharmapala, in this instance would be Skanda Deva comes in. On the surface, it can be said that the Skanda Deva can overcome obstacles and protect a practitioner from harm but what I feel, more importantly, is nurturing your own confidence in your own Dharma works. This can be your own study or sharing among family and friends or teaching others. The type of confidence that I am talking about would be like an affirmation from Skanda Deva who have been around long enough to bear witness whether is your Dharma work on the right track.

Does everyone need to really venerate or have special worship towards Skanda Deva or any Dharmapala? My answer is no. My belief for Dharmapala in general is that you will be well guided and protected if you conduct yourself in accordance to the spirit of Dharma. So what if you make many and expensive offerings to the Dharmapala but living a mindless life or even worse, distort the Dharma to confuse people?

Hence, it all starts right back from your attitude, your outlook and your confidence in your Dharma work.

Today is the 3rd day of the 6th month according to the Chinese calendar and this day is traditionally used to symbolise the birthday of Skanda Deva.

Despite that Varada Shrine does not worship Skanda Deva specifically, nonetheless, I would like to take this opportunity to give thanks and appreciation to Skanda Deva for all spiritual protections that He had rendered to many over this very long period of time. May You also grow in spirits and filled with joyness.

Veneration to Skanda Deva, Guardian of the Teachings of Sakyamuni Buddha.